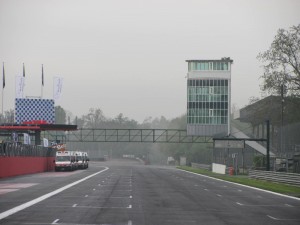 Long trip this time as Arjen went to Monza just north of Milan by car. With him 4 Orangemen trainees who – we’re sad to say – did not (yet) passed their Orangemen exam. It also meant we were not able to join the action until Saturday – instead we had time for a little exploration of the famous Italian track.

A historic place and one can tell as soon as we arrived at the scene. Known for hosting the Italian Grand Prix, Monza celebrates its 90th anniversary this year. It’s the third oldest race facility in the world and it shows. And it’s a big place too! The track is exactly 3.6 miles long (nearly 6 km) and has a start-finish straight that goes on and on. On top of that there are more long straights, a couple of chicanes and less than a handful of real corners – Curva Grande, Lesmo 1 & 2 and the most famous of them all – the Parabolica. And then there is the mythical high speed oval with real steep banking. No racing anymore these days on the oval (it was last used in 1969), only once a year the Monza rally runs on the banking. Our home for the weekend would be the second chicane, better known as the Variante Roggia.

Missing the practice sessions on Friday meant we were in the deep for qualifying on Saturday – 55 GT3 cars tried to set a time in a 3-way split session of 15 minutes per driver.  To spice it all up, the weekend would see mixed weather conditions (but nowhere near the expected and more traditional Italian temperatures in the spring). For now it was dry – race day would be completely different. You don’t need to be Einstein to figure out that would lead to some havoc – and so it proved. It started innocent as I acted as the hotel porter and closed the wingdoor of one the Mercedes SLS cars but it got serious when the BMW Z4 no. 4 oversteered on the exit of the chicane into the guardrail – out on the spot and some – shall we say – rather inefficient recovery of the stroken car…  Soon after the restart another one of the pre-race favorite Audis decided to honour us with a visit and missed the BMW by an inch… Counted 3 flags in total but somehow they managed to finish the session. Saturday ended with a classic tangle of two British Formula 3 cars exiting the chicane towards Lesmo 1. No one hurt, apart from some egos.

Sunday was wet. No heavy rain but rather a constant fall of water from the skies. As it seemed, the race director had his course in the US as the race started under Safety Car – o crap. The race director must have spotted it right though as one of the drivers managed to crash his McLaren in the Variante Ascari while the SC was still out… After more than 30 minutes we finally saw the real start of the race which turned out to be a good one. Porsche’s Prospeed had the race in the bag until the last hour as Heinrici faided. But it was a Belgium 1-2-3 at the finish, Marc VDS BMW Z4 winning from 2nd place WRT Audi R8 and KRK Mercedes SLS.

Good race and good food (not mentioning the Whisky….) versus not so good weather and long trip – we’ll be back next year however, only then we’ll be flying again. And make sure to visit one of the remaining Blancpain events – this series is well worth it.

Mille Grazie to Massimo, Roberto and all the guys and dolls from post 3 and 3.1!

The pics can be found here.

Co-Chairman & Head of Merchandise
View all posts by arjen →
This entry was posted in General. Bookmark the permalink.