Only the first event on (one of) our hometrack(s) – our season is truly under way now.

Headlining the event were both SRO’s showpieces that have been in troubled waters over the winter. It’s clear that something in the organization is lacking – only 17 cars for the ‘big boys’ and an abysmal 11 for their GT3 cousins. The true star series of the event was of course the Supercar Challenge (powered by Dunlop), hosting more than 75 cars split in 2 groups, doing 2 races each. Entertaining for sure. 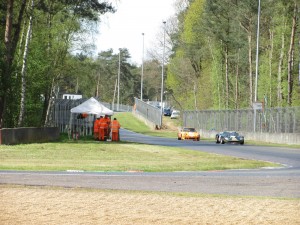 You could definitely tell we were at a Belgium track but looking at the weather one could suspect it was Spa rather than Zolder (or Monza the weekend before for that matter!). Very mixed weather conditions would make for some entertaining races! First casualty didn’t take long therefor as one of the smaller Supercar Challenge cars got itself stuck on the tire wall backwards opposite post 16 after only 1 lap!

At the end of the Friday one the Heico Mercedes SLS crashed on top of the entrance tunnel, just upstream our post. We were on post 15 for the weekend, probably one of the easiest post to reach on a circuit anywhere, just 2 short turns from the road, around the medical center and voila! Plenty of room to park the car and no traffic jam leaving the track when we returned home on Sunday evening.

Back to the action, Saturday’s GT1 race saw the slower Chinese Porsche crashing into the tyre barrier at exact the same spot as where the little challenge car went of the day before. The Porsche continued to the pits but the tyre wall needed a little repair afterwards, causing a slight delay. No further drama for the remainder of the weekend, just a couple of spins and drive offs.

Spend Sunday as a tourist (apparently a busload of Dutch marshals invaded the post, totaling the number of marshals at a staggering 22!) and after the traditional breakfast for the entire crew, showed our UK friends Paul Buckland and John Dickinson around the place.

We had fun, the racing wasn’t great but entertaining enough.

Now Arjen is getting ready for his Spa WEC/Zandvoort ADAC GT doubleheader before we go to Pau for the Grand Prix and the Nurburgring 24H at the famous Nordschleiffe. Then it’s the Spa Classic and Blancpain Series at Silverstone before we head to France again for the big one: the Le Mans 24H. It’s a busy schedule but we love it!

The Zolder gallery can be found here.

Co-Chairman & Head of Merchandise
View all posts by arjen →
This entry was posted in General. Bookmark the permalink.